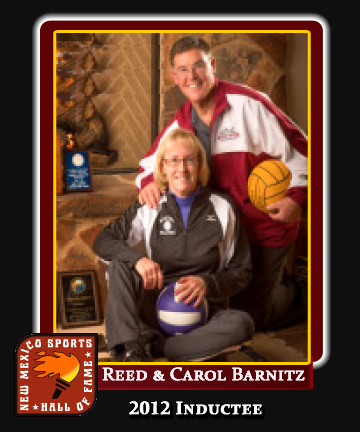 Although this couple jokingly squabbled about which one was riding the other’s coat tails, at their in- troduction as two of the newest members of the New Mexico Sports Hall of Fame, the real irony is that neither needed a coat for the respective sports they’re best known for. Carol Barnitz coached volleyball at Manzano High School – in a gym. Reed Barnitz coached swimming at several area pools. No coat mandated at those venues, either! They say behind every successful man is a good woman. Suffice it to say in the Barnitzes’ case, there’s also a good man behind this successful woman. Married since April 6, 1968 – nearly 45 years ago — the couple has more than 80 years of coaching sports in the Albuquerque community impacting youth, high school and masters-age athletes alike. “They feed off each other and steal ideas from each other, and that’s what makes them both great coaches,” explained Paula Sperling, Carol’s sister. Carol is a 1965 graduate of Highland, where she played four sports in the days before Title IX: volleyball, basketball, softball and track. A lifelong educator of Albuquerque, she is believed to hold one of the longest-tenured coaching positions in the state, having spent the past 41 years as the head volleyball coach at Manzano High School. She recently retired. At MHS, she amassed 426 victories, multiple district championships, state tournament appearances and a state championship (1975). She has been honored by the New Mexico High School Coaches Association, the NMAA and APS for her accomplishments, milestones and dis- tinguished service. Maybe she could have used a coat – she also coached softball and was an assistant track and field coach. Reed went to high school and played sports in Philadelphia, telling the Journal he “kind of piddled at everything,” before swimming “for one year at Temple University.” After a time, while in the Air Force and attending a small college part-time in South Dakota, Reed found himself looking for a school that would accept his credit hours. The rest is Albuquerque history: “UNM took them … and it was warm here.” He earned a bachelor’s in recreation and a master’s in counseling at UNM and began coaching in Albuquerque in 1966, with AAU and USA swimming groups at Coronado Aquatic Club. It’s only natural, then, that he met his future wife poolside. Carol told Albuquerque Journal reporter Harold Smith in 2005 that, “(Reed) was a lifeguard at the Albuquerque Country Club when we met; I thought he was too young for me.” In 1978, he founded Duke City Aquatics Club, which he served as president until 1999. During his time with Duke City Aquatics, his teams won 24 consecutive USA swimming state championships, including short-course and long-course, in age group and senior meets. During that time, Reed also served as the swim coach at St. Pius X (1981) and Highland for more than 20 years. In addition, he coached Albuquerque water polo teams to junior national championships three times, and more than 25 of his players were invited to the junior nationals selection camp. Among his junior national champions, senior champs and Olympic trial qualifiers: Jennifer Hommert, Penny Pecastaing and Kirk Hampleman. It is estimated that Reed, who was born in the City of Brotherly Love (Philadelphia) and evidently brought that love here, has coached more than 4,000 athletes in his time as a local swimming and water polo coach. Among his fans: Former La Cueva swim coach Quint Seckler, who touted Reed as “the best coach in the state” before his Bears went up against the Highland squad coached by Barnitz at the 2003 state meet. He is the only swimming coach in the state to ever receive U.S. Swimming’s highest rating (level 5). But, wait – there’s more: He was the regional Senior Open Division racquetball champion in 2003, the Masters Division national 10K swim champ in 2006 and the Masters 5K runner-up in 2008.. He stays in shape with open-water swims and competitions; he and Carol, who live in Tijeras, stay in shape by riding bikes and jogging in the mountains.