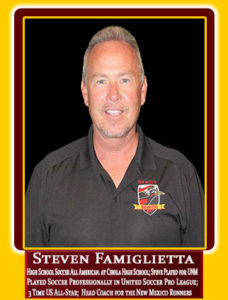 College
• Full Scholarship to University of New Mexico for Soccer. He played only one season.
Steven moved to Rio Rancho, New Mexico when he was ten with his mother, stepfather and brothers. Immediately Steve got involved with youth soccer. A neighbor, Harry Gabel, had started the Rio Rancho soccer club and introduced Steve to the sport. Soccer became Steve’s passion from this time on.
Immediately Steve got involved with the sport in all facets, playing, officiating, coaching and mentoring. Steve was offered a pro contract in Europe with FC Olten in Switzerland. Shortly before leaving for Europe to begin his pro contract, Steve was involved in a car accident that tore his ACL leaving him unable to play for the European team. Steve would rehab and start playing soccer for the University of New Mexico. After one season for UNM, Steve was recruited to play in the Southwest Indoor Soccer League (SISL). He was an inaugural member of
the league’s first 8 teams which later became the United Soccer League (USL). During his time with SISL, Steve was honored with the opportunity to represent the USL by competing in Russia. Steve continued to play indoor and outdoor soccer for numerous teams, also playing as a player-coach.
After retiring as a player for 32 years in 2007, Steve’s focus shifted wholly to coaching and mentoring players. In roles such as Technical Director and Director of Coaching for numerous New Mexico Youth Clubs, Steve has continuously travelled the State giving back to the soccer community.

Honors
• 2006 Inducted in the USL Hall of Fame in 2006 as a President’s Selection.
• 2007 The city of Rio Rancho recognized Steve after his USL induction with an award
• 2010 Cibola High School Athletic Hall of Fame
• 2019 MLS Colorado Rapids Coaches Symposium Guest Coach

Community Involvement
• Steve annually conducts soccer camps for kids in rural communities waiving payment for those who cannot afford it. Steve also regularly collects soccer gear, cleats, uniforms etc., and donates them to communities in need.
• Following in the footsteps of his mentor, Harry Gabel, Steve mentors young players through involvement in coaching and officiating to make a more well-rounded player and human being.
• Steve is a financial supporter of the Domestic Violence Resource Center of NM and National Dance Institute (NDI) of NM.