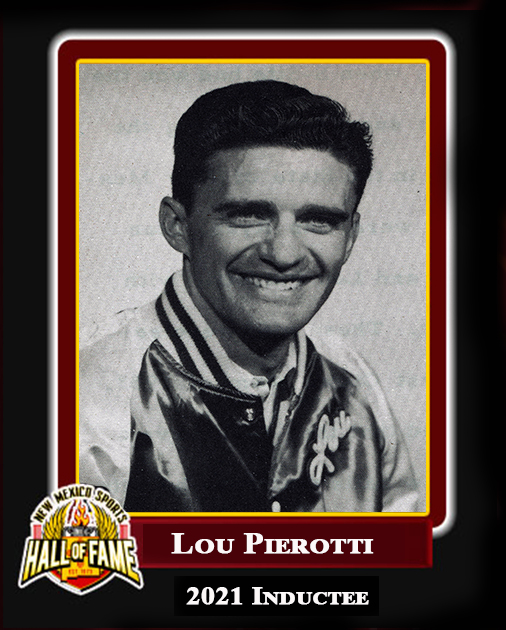 For 65 years of sporting competition and fifty-five active business and sporting years in New Mexico were the success and lasting honors Lou and team members received because of his creation of the Pierotti’s Clowns. The team was excellent, entertaining, and meant a great deal to the Los Alamos community during the post WW-II cold war period. The young city was growing, but still closed to the public. The Pierotti Clowns team provided an exceptional fast pitch softball experience, together with wholesome circus like clown entertainment for families in the community.

Lou grew up in a rural community near Walsenburg Colorado. He was an orphan at the age of six due to the early death of his Italian immigrant parents, Pietro Pierotti and Angelina Lami. He was the youngest of six children. His older siblings, three brothers and two sisters raised Lou.

Lou enlisted in the Army in 1942 and completed his basic training at Camp Cook, Lompoc, CA. He transferred to the Army Air Corps as a sergeant, first stationed at Lowry Air Base in Denver, CO, and then in Panama until his discharge as a staff sergeant at the end of World War II. In 1944, Lou married Lee Ruffini at the Lowry Air Base.

Lou and Lena Pierotti moved to White Rock New Mexico in 1951. Lou worked outside the closed city of Los Alamos as a butcher in a grocery store. In 1952, Lou and his wife Lena became the first owners of a business in Los Alamos, by betting on themselves, by obtaining a loan to start the Pierotti’s Soda Bar. The restaurant was successful and the home of the Pierotti Clowns. They sold the restaurant in 1965.

Lou moved to Albuquerque, New Mexico. Lou and four partners opened Valley Bowl on North Fourth Street in 1965. Lou and Lena returned to Los Alamos and purchased another business in 1967. They created Pierotti’s Los Alamos Floral with wife Lee and Vera Gallagher as floral designers. The floral shop proved to be another successful business adventure for 18 years, until final retirement in 1985.

Lou and Lena lost their home and therefore Lou’s score books, scrap books, photos, and trophies destroyed completely in the 2000 Cerro Grande Fire in Los Alamos. Thus, some of his accomplishments may still not be known.

High School
• Outstanding athlete and starred as an exceptional high school third baseman. Between 1935 and 1938, baseball and football were the only high school sports in Walsenburg.

Honors
• The Pierotti Clowns were featured in six national magazines, including the first issue of Sports Illustrated dated August 16, 1954.
• In 2009 Lou and the Pierotti’s Clowns were inducted into the New Mexico ASA Softball Hall of Fame in Las Cruces.
• The Pierotti Clowns were inducted into the New Mexico section of the ASA National Hall of Fame in Oklahoma City.
• Honored with first annual designation of “Living Treasure of Los Alamos” on September 26, 1999, by Los Alamos County. Lou and Bun Ryan were honored in the first year of the annual award, with three other Los Alamos citizens.
• The Los Alamos County Commissioned Susan K. Daily for the creation of a giant tile Mosaic Monument depicting the circus atmosphere created by the Pierotti Clowns team while playing Softball. The Mosaic, located on Central Ave. in front of the Public Library, captured the shape of the Jemez Mountain landscape behind the monument, and included a tile gathering area.
• Lou and Lena were honored by Los Alamos as Heroes of the Cold War. Photos of the couple’s successes are exhibited in the Los Alamos Historical Museum. Lou and Lee are one of a very few merchants honored in this way.
• The Pierotti Clowns were honored by the State Penitentiary, because of the many games they played at the Penitentiary and for creating an atmosphere of respect and acceptance that sprung from the enjoyment of the game and the show.
• The Pierotti Clowns were also honored to be the first team and community that hosted a sporting event, against the Rocks in Los Alamos, outside the prison walls. Members of the “Rocks” would present each clown with a drawing often in color showing how they remember them in their uniform from the previous year.
• Lou was honored by the NNMGA for his work to create, organize, and serve as President and communications director during his advocacy, by ordering a replica of his 1990 Championship Trophy from the Nambe foundry after it melted in the Cerro Grande fire.

Community Involvement
• Lou was a productive member of Kiwanis International from 1952 through 2015.
• Lou was honored with the first Los Alamos lifetime Honorary Membership of Kiwanis International for his work providing hundreds of thousands of dollars for various Kiwanis charities. He was in Kiwanis since 1963.
At age 69 Lou organized and together with Santa Fe’s Ray Torres created the Northern New Mexico Seniors Golf Association. (1990)
• Served as President of the Northern New Mexico Seniors Golf Association. (1991-1993).
in 1990 Lou, then 69 years old, organized members of several clubs and started the over 55 Northern New Mexico Seniors Golf Association. The association would grow to over 375 golfers.
• Supported local charities and for funding needed for student activities and sporting events continued for 50 years such as bowling and little league teams, Lassie League teams, Babe Ruth teams and American Legion teams.
• Served as a board of director for the Los Alamos National Bank, the Los Alamos Community Bank, the Los Alamos Hospital Board, the Sombrillo Nursing Home and Aspin Ridge Assisted Living Center. (Different service times from 1960 through 2002)
• Two occasions when they owned the Soda Bar, they made and delivered sandwiches, soft drinks, and water for fire fighters working relentlessly stop raging forest fires in the Los Alamos area.
• Entertained hospitalized patients (in his clown uniform) at the Los Alamos Medical Center.
• Learned the auctioneer cadence after the war at cattle auctions and used his skill to conduct charitable money raising auctions for the Immaculate Heart of Mary Parish. The floral shop made sure that the altar flowers that Lee designed were fresh for Sunday mass at the church for 19 years
• Spoke to grade school children for countless years at the request of teachers.
• Helped with announcing as a football color commentator. Darrell Burns invited him to join the radio station, located 230 feet from the Soda Bar, to read the morning sporting news for ½ hour following the breakfast rush.
• Dress in a complete Topper Football uniform with helmet and a mask to raise money for the Los Alamos High School. The students and adults would pay a small donation for the right to try to guess who the local celebrity was and try to win the grand prize.
• Brought Touchdown Tony Hill of NFL Dallas Cowboy fame to Los Alamos for a charity event in 1983.
• Donated his Pierotti’s Clowns memorabilia to the Los Alamos Historical Society for use as an exhibit in the Los Alamos Historical Museum
• Never missed an invite to throw out the first pitch on opening day of the little league season. At a Triple A Albuquerque Isotopes, he threw the first pitch at a game held in honor of the Pierotti’s Clowns.
• Family maintains the Lou and Lena Pierotti Kiwanis Scholarship fund to help deserving civic minded student-athletes. Individual Lou and Lena Pierotti Scholarships have been awarded annually since 2016.

Family
Lou cared for his wife Lee until her death in 2014. They celebrated their 70th wedding anniversary in June 2014. The two of them were partners in every aspect of their lives from working side by side to raising their five children, Michael of Las Vegas, NV; Marilee Pierotti Lau of San Francisco, CA; Lewis of Columbus, OH; David of Flagstaff, AZ; and Peter of Albuquerque, NM; seven grandchildren and two great grandchildren.