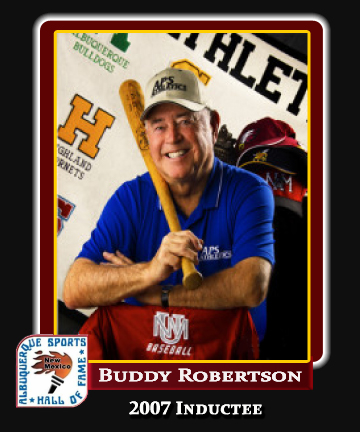 You’ve got a better chance of discovering an Artic iceberg in Hobbs than of finding someone who will say a bad word about Buddy Robertson.

Hard working. Honest. Decent. Friendly. Honorable. Family-oriented: those description are the ones that followed Robertson in his long career as an athlete, coach, and athletic director within the Albuquerque Public Schools.
In a business where it’s easy to make an eternal enemy, Robertson found only friends. Most were, and are, amazed by his unique ability to remain positive as he worked to improve the lives of high school coaches, athletes, and parents.
“I always figured my job was to help the coaches, because the coaches where the ones who made the kids happy, and the kids were the ones who made the parents happy,” the 69-year-old Robertson says, trying to explain a formula for success that sounds simple, but isn’t.
From 1977 to 2002, Robertson was an athletic specialist and athletic director for the states’ largest school district. Sounds like administration, and it was, bur Robertson was never at home in the office. He was always at games, or running track meets, or helping stff tournaments.
He became the father confessor, the trusted confidant and the honest broker for thousand of people who participated in APS sports.
“I never tried to close the dor on people, even if you didn’t agree with them,”