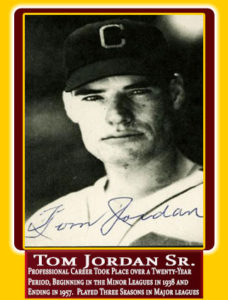 Professional: Tom was a beacon of light to many in the Roswell community. His family moved to Roswell in 1936. His contributions are not only on the playing field, but he has tutored his son, Tommy Jordan Jr. who was part of the little league team that brought bring the first and only Little League World Series to Roswell, NM. He played in the major leagues in 1944-47. September 4, 1944, for the Chicago White Sox was in major debut. His last major league baseball game was April 28, 1948, for the St. Louis Browns
• Following the death of Fred Caligiuri, Jordan was recognized as the oldest living major league ballplayer at the time of his death, which occurred just 10 days before his 100th birthday. He was the last living former major league ballplayer born in the 1910s.
• extensive minor league career throughout New Mexico. He played for and managed the Albuquerque Dukes in 1953-54. He played 20 years of minor league baseball beginning in 1938 until 1957.
• a catcher who appeared in 39 major league games over three seasons for the Chicago White Sox (1944; 1946), Cleveland Indians (1946), and the St. Louis Browns (1948). Born in Lawton, Oklahoma
• Was a playing manager for a number of unaffiliated teams in the low minors in the Southwestern United States.
• Spent the entire 1946 campaign in the major leagues, starting with the White Sox before being traded to Cleveland for fellow catcher Frankie Hayes on July 5. As a member of the Indians, on August 25, he hit his only major league home run, a solo shot at Fenway Park off 20-game-winner Boo Ferriss in a 2–1 Boston Red Sox win.
• During his big-league career, Jordan collected 23 hits in 96 at bats, including four doubles, two triples, one home run and six runs batted in.