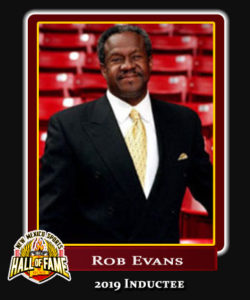 High School
• 1963-1964 Played on the varsity high school basketball team under legendary coach Ralph Tasker.
• Senior year he was named co-captain.
• Played on the team made it to the 1964 championship game losing a one-point game to rival Roswell 80-79. The team was 26-2.
• Named to the South team at the North -South State All-Star Basketball game in Albuquerque.
• Three Year Letterman in baseball playing shortstop.
• Batted .474 for the baseball team
• Drafted out of high school by the Colt 45s, which eventually became the Houston Astros.

Honors
• 1967 Mexico State Most Outstanding Athlete
• 1975 NMSU All-Time Basketball Team member
• 1987 Texas Tech Outstanding Achievement Award
• 1990 Lubbock Christian Athletic Hall of Fame
• 1991 Elected President of the National Association of Basketball Coaches
• 1994 Inducted into the US Bank/New Mexico State Athletics Hall of Fame
• 1994 NMSU’s School of Education Alumnus of the Year
• 2000 Southwestern Christian College “Man of Valor” Award
• 2000 Arizona March of Dime Sports Leadership Award
• 2003 Sports Illustrated 101 Most Influential Minorities in Sports.
• 2004 Honored as Distinguished Alumnus by the Lubbock Christian University
• 2009 Lea County New Mexico Hall of Fame
• 2013 Hoop Scoop Magazine named Evans the Nation’s No. 1 Mid-Major Assistant Coach
• 2018 Southeastern Conference Coaching Legends Award
Community Involvement – Carolyn and Rob have worked as a team both professionally and in life from the beginning.
• Raised money at NMSU with golf tournaments sponsored by the Black Alumni Association.
• 2001-2005 College Basketball Ethics Committee-NABC
• 2000-2005 Coaches vs Cancer Board Member-NABC 2000-2005.
o Carolyn and Rob have been involved with Coaches vs Cancer since the beginning with Norm Stewart.
o Wife Carolyn was on the Coaches Wives vs Cancer Committee from 2006-2017.
o She also was Vice President, then President the local chapter of The American Cancer Society in Oxford, Mississippi from 1993-1998.

Family
• Married Carolyn Marshall in Hobbs on July 25, 1970. Carolyn dropped out of college to work to help care for her ailing grandmother in 1968. She went back to college after raising their two children and graduated from Wayland Baptist University Lubbock with Honors in Human Services, with a specialization in Child Development in 1995. After raising their two children, Damon and Amber, Carolyn Evans taught child development for a time at South Plains Community College Lubbock, where she was won Outstanding Faculty of the Year Award in 1989. “We decided to focus on the stability of raising our kids in one place,” Rob Evans says. “You get one chance to raise your kids, and you have to do it right. Lubbock was a good place to do it.” Carolyn also kept busy with Community Boards, PTA, Local and State Teachers Association for The Education of Young Children, and Junior League.
• Damon, son graduated with honors from The University of Mississippi in 1996 with a degree in Bank and Finance. He also was the 1996 Orrin Swayze Scholar in Business Award Winner. Damon was the first Afro American to formally rush and pledge Sigma Chi fraternity at Ole Miss. Has his own business in Phoenix, Arizona ( 101 Distribution and Arena ) Music business. He and his wife Emily have 2 children, daughter Elliot (8) and son, Oliver (6).
• Amber, daughter attended Ole Miss and studied Radio and TV Broadcasting. She was one of the 1st Afro American females to pledge Phi Mu sorority at Ole Miss. She and her husband, Cliff have 5 children. Daughters Nia,15, Sarah,11, sons, William,14, Brandon,8, and Gregory, 2.
• Hobbs’ growth stabilized after the oil craze waned. When Rob Evans was born September 7, 1946, it had a population of about 13,000, including his parents, Oscar and Gladys Evans. Gladys was a home cleaner, and Oscar, a preacher and janitor. Robert was the fourth of seven children, all of whom would go on to graduate college. Hobbs then was as segregated racially as any city in the Deep South. The blacks who accounted for about 10 percent of the population lived in one part of town, and the whites in the other. Those of Latino descent lived in the black neighborhoods. Gladys Evans gave birth to all seven of her kids by her 25th birthday, including Rob, the middle child of five brothers and two sisters. Oscar Evans was a janitor during the days, and often did odd jobs at nights. He preached at area churches on Sundays and had a great love of books. A courteous, unpretentious man, Mr. Evans carried himself in a manner that earned him adoration and respect. Gladys Evans cleaned them homes of white folks in Hobbs to help make ends meet, no small task in a family of nine. Hobbs was a separate and unequal world for blacks during Rob Evans’ youth. One evening, when Evans was 6 or 7, his dad took him and his brothers to work at a second job, cleaning an attorney’s office. “The guy decided to have fun at my dad’s expense,” Coach Evans recalls. “Oscar, get over here.’ Dad continued to work. You don’t get over here, I’m going to kick your rear end.’ Dad said, Boys, let’s go.’ I said, Dad, we need the money.’ He said to us, Son, Dignity and integrity are non-negotiable.’ I get chills right now when I think of it.” Neither of the Evanses had much formal education — eighth grade was it for each. But they put the schooling of their children atop their list of priorities. (All seven children are college educated, a remarkable achievement.) On May 17, 1954, the U.S. Supreme Court ruled against the continued segregation. The integration of Hobbs High School meant black kids could play for the Eagles’ basketball team coached by Ralph Tasker. Tasker then was just starting a half-century stint that would earn him acclaim as one of the nation’s best. “I remember my parents telling me to listen to the radio one night,” Evans says. “It was 1955, and I was 9. Some white parents had been giving Coach Tasker grief about playing so many black players. He came on and said, I’m going to play my best players. You want another coach, get one.’ To kids in the black community, he was saying, if you’re good enough to play, you will.” Evans played baseball, basketball and football with a drive and skill that would carry him far. He also competed hard in the classroom with the white kids at newly integrated Houston Junior High. “There was a little bit of difference at first academically” he says, “not from the standpoint of innate intelligence, but exposure to certain things in life.” Coach Tasker named Evans as co-captain in his senior year, an honor that brought with it a responsibility that transcended race. “Looking back on it, the coach had the foresight of making me one of the guys in charge of bed check,” Evans says, relishing the memory. “Here I was, a 17-year-old black kid in a segregated community, and I’d go to the other side of town, knock on doors, and ask if my white teammates were home. My next comment was, I have to see for myself.’ “Still, the specter of racism always lurked at Hobbs High. “Some kids would make a point of pointing at me in the hall. That’s Rob Evans. His mother cleans our house.’ That was denigrating; however, they meant it or didn’t mean it.” These life lessons led Rob to have a positive impact on many youth and coaches. ” Coach Evans has used athletics to teach life lessons,” Evans said. “Because you have to help them understand that at some point the ball is going to go flat.”