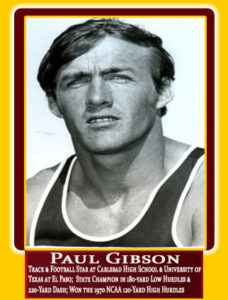 Paul was one of the best athletes ever in New Mexico in high school football and track. Paul Gibson is considered by most in the Carlsbad Track and Field Community to be a “Legend”. Paul was first discovered to be a hurdler “by accident” when someone left a hurdle on the track while sprinters were doing repeat 220’s. He effortlessly went over the hurdler to the surprise of the coaches. He had a great career at UTEP in both sports. He had a chance to play pro football and track. Unfortunately, he was killed in a car accident in 1975.

High School Accomplishments
• Track and Football Letterman?
• 1966 State Champion in 180-yard low hurdles and 220-yard dash. He was also part of the state championship 4×100 yard relay team.
• 1966 Won the Golden West 120-yard high hurdles, which at that time was considered the national high school championship with a hand time of 13.6 seconds. and is the only former athlete from Carlsbad High School to be considered a “National High School Champion”.