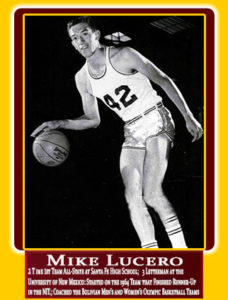 College Accomplishments
• 1961-62 Led the team in Free Throw Percentage with 92-115 .800 % and rebounds with 239 and 9.2 rebounds per game.
• 1962 March 1st Ranks 10th all-time win with 21 Rebounds in a game against Brigham Young
• 1962-1963 Mike, who along with Ira Harge carried team to a 16-9 record, Bob King’s first year coaching at UNM.
• 1963-1964 One of three seniors who led the Lobos to the best season in school’s history with a record of 23-6 and tied Arizona State University for the Western Athletic Conference title. He was the only native New Mexican on the team
• Key wins my senior year were against Kansas, Purdue, Utah, BYU, Arizona State, Arizona, Texas Western (now UTEP), NMSU, Drake, and NYU. The 1964 team was ranked 12th in the US at one point, finishing 16th in the polls.
• Member of the first team from the Southwest to be invited to the NIT Tournament
• 1964 Big Factor Offensively and defensively for the Lobos against New York University the in the NIT Tournament semi-finals. Governor, Jack Campbell accompanied the team to New York. The day they played in NYC for the NIT game against Bradley, Tom Bolack, Lieutenant Gov., paid for the televising of the game in New Mexico. There was not a single car on the highway on that day, as basketball fever was rampant, gluing citizens to their TVs as they watched one of their own play at Madison Square Garden. It was at that time that the NIT was considered a better tournament than the NCAA.
• 1961-64 In three seasons, Mike scored 792 points and 551 rebounds, which ranks him 24th all-time in career rebounding. Mike was known as a smooth 6-5 forward who would shoot lights out from the corner. He averaged 10.2 points for the 1964 team the gave birth to Lobomania and the building of the PIT. The team played at Johnson Gym with a capacity of 7200.
Post College Athletics
• 1966 -1986 Played AAU Basketball following my tenure at UNM, qualifying and competing in 7 National AAU Tournaments with the House of Carpet and Maloof Men BB teams.
• Played 8 years in the Pizza Hut 3 on 3 Basketball events held locally and nationally.
• 1990 to 2009 Played Senior Olympic Basketball from. Won numerous Senior NM State BB tournaments and competed 6 times at the National Sr. Olympic Games held nationally every two years in different cities across the US. This included the Huntsman National Senior Games in St. George, Utah.

Use categories below to help you filter through all New Mexico Sports Hall of Fame Inductees.