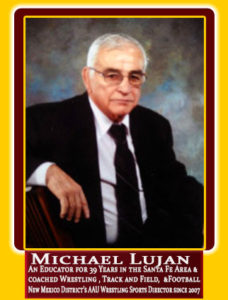 High School Accomplishments
• Lettered 4-year letterman in wrestling at Rio Grande High School under Coach Evaldo Valdez for his freshman and sophomore year and the last two years with Coach Russell Goff.
o Undefeated his sophomore year but the school district went on strike and thus were prevented to participate in the state tournament.
o 1969 & 1970 Placed 3rd in the state wrestling meet.
• Lettered in football in his freshman year, which is the only year he played in high school.
• Lettered in cross country in his senior year.
• He ran track his senior year for 1987 NMSHOF Inductee Coach Bobby Santiago, who inspired him to go to college.
• With the help of Upper Bound for two years, he was able to graduate from high school.
• Coach Ron Tabor and Coach Jack O’Neill were helpful in getting him to wrestle in college despite his reading deficiencies and poor GPA.

College Accomplishments
• 1970 – 1971 Wrestled in college at Trinidad state Junior college before the program was dropped during the 1971-72 season.
• Student manager for the basketball and baseball teams during his sophomore year.

Professional: Michael has been educator since 1974 with a two-year leave and a coach since 1972. His love for wrestling started at an early age in 1960 at the Albuquerque YMCA under the direction of Jack O’Neill. From the beginning the odds were stacked against him, growing up as the 10th of 15 children. He lived with 14 brothers and sisters in a 1,000 square foot home in Albuquerque. He had to sell newspapers as a kid since he was 6 years old to junior high. He has been a staple for the last three decades, in the wrestling community in New Mexico as coach, mentor and father figure to thousands of young men. Coach has supported wrestling in the State of New Mexico at all levels – youth, high school and college. He always provided competitive opportunities for student-athletes from his own school and others at all levels.
A passionate competitor who was always respectful of the competition and opposing coaches and student-athletes, Lujan’s wrestlers were known for their competitive spirit and physical style. Michael’s enthusiasm has inspired many kids on and off the mat and in the classroom for many years to be a better person and encouraged them to attend college. His message of “Every kid in this world has something good in them”. I tell them, “If I can teach one thing it’s to get along in the real world and respect yourself and others. If you can do that then you will go a long way in life.” His commitment to kids and wisdom that he has learned from being a poor student to a top coach and team has been an inspiration to the people in New Mexico.
• 1972 First coaching experience was coaching a youth wrestling team from the community center in Pueblo, Colorado and then competing against his Trinidad JC college coach’s community center team.
• June 1972, Lujan was a National Olympic Trial qualifier in Anoka, Minnesota. He continued to wrestle Freestyle through 1977.
• 1974 Fourth grade teaching job at Milan Elementary school and became volunteer high school assistant wrestling at Grants High School under Coach Myers.
• 1975 Taught Kearney Elementary for nine years – Bi-lingual. Assistant wrestling coach at S.F.H.S from 1975-1980. Freshman assistant football conditioning coach at S.F.H.S. in the mid 1980’s as well as coach for track & field.
• 1976 Started girls wrestling locally, which was the first in the country.
• 1975 to 2007 – Founder and CEO of the Santa Fe Junior Wrestling Program, running the program for 32 years. Coach Gilbert Mier was instrumental in helping Michael start the program. He recruited coaches to start wrestling in their elementary and junior high schools. Many of his former athletes started in the program. Many of his former high school wrestlers followed Coach’s lead and became coaches in the Junior Wrestling Program. He had coached Ten AAU national champions during his time with the Santa Fe High Junior Wrestling program
• 1980 Became the head wrestling coach at Santa Fe High School. He would lead the program to one of the elite high school programs in the State until 2002. The won 3 district titles and were in the top .
• 28 Individual state champions including Javier Posa, who was a three-time champion in 1988-89-90
• Eleven of his high school wrestlers would go one to college and become All-Americans in wrestling including NCAA Division II National Champion in Jason Tapia.
• Assistant coach for the USA Wrestling New Mexico National Team in the mid 1980’s, guiding kids at regional and national events for many years.
• Five former wrestlers have become head wrestling high school coaches – Johnny Tapia at Pojoaque High School; Rodney Romero at Manzano High School; Javier Posa at La Cueva High School; Mark Hussey at Santa Fe High School and Joaquin Baptista in Houston, Texas.
• Five of his former high school wrestlers are in the New Mexico High School Wrestling Hall of Fame Phillip Anaya, Rodney Romero, Alex Tapia, Javier Posa, Don Ortega

Honors
• 1988 Listed in America’s Who’s Who of High School Wrestling
• 1989 Recipient of the Franklin Select Coaching Circle award and the Scholastic Coach Magazine Award
• 1997 Lujan received the National Jefferson Award, presented by the Pentagon to seven selected coaches worldwide
• 1997 USA Today Weekend Most Caring Coach Award.
• 2001 Honored by the New Mexico High School Coaches Association as Wrestling Coach of the Year and the AAU Wrestling Man of the Year.
• 2002 Honored by the New Mexico Sports Hall of Fame as “Promotion of the Year” Award for coordinating the Amateur Athletic Union’s Grand National Sanction Wrestling Tournament
• 2002 Honored by the Albuquerque Convention and Bureau as their “Ambassador Award”
• 2003, the Santa Fe Board of Education presented him with the Silver Zia Award. This award is presented to individuals who show dedication and effort towards students in the Santa Fe school system.
• 2004 Honored by the Santa Fe Public Schools and the Board of Education in, naming the Santa Fe High School Wrestling room the “Mike A. Lujan Wrestling Room.” He was also given the Lifetime Achievement Award by the Santa Fe Junior Wrestling Program
• 2006 Inducted into the New Mexico Wrestling Hall of Fame
• 2007 Inducted into the AAU National Wrestling Hall of Fame

Community Involvement
• 1974 Summer wrestling coordinator for Bernalillo, NM Parks & Recreation program 1977 One of the first coaches in USA to start girls’ youth wrestling.
• 1982 -1992 USA Wrestling Kid’s Director in New Mexico
• 1995 – 2019 Serves as the New Mexico District’s AAU Wrestling Sports Director, which supports AAU activities.
• 2001 – 2002 the AAU Grand Nationals tournament Director
• 2007 to Present Instrumental as a legislative lobbyist in raising funds to start an NCAA Division II wrestling Program at the New Mexico Highlands University. He continues to be part of the program to this day.
• 2005 – Honored as an outstanding coach by Trinidad State Jr. College alumni.
• 1972 – Baseball manager for Trinidad State Jr. college
• 1971-1972 Basketball manager for Trinidad State Jr. college
• Helped raising over $50000 for the Junior Wrestling program during his time with the program.
• Instrumental in raising money through the state legislator for the New Mexico Highlands University’s wrestling program.

Family
• Sally Thomas Lujan, wife have been married for March 18, 1978 in Vermont. She survived a drunk driving accident. He has been by her side during your more than 30 surgeries.
• Two children: Michaela, daughter and Michael, son
• Ten grandchildren – Tomas, Engrique, Damien, Tessianna, Samara, Josiah, Steven, Jonathan, Krysta, and Christopher.