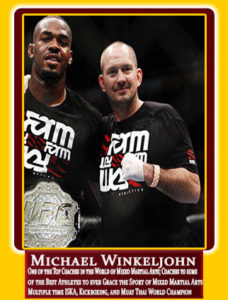 Mike accelerated in sports in junior high school but following his parent’s divorce, he began to get into fights and do what he says, were “all the wrong things”.  When Mike was 18, he walked into Mr. Bill Packer’s Dojo to learn kickboxing. His life was forever changed at that point. From there, Mike excelled in Kickboxing for 17 years. Towards the end of Mike’s fight career, he met Greg Jackson, who many consider to be a legendary coach in the sport.  Mike and Greg are responsible for launching and helping grow the sport of  MMA, from right here in Albuquerque. In addition, Mike has taught the better part of 38 years, teaching athletes, kids and families in the sport of kickboxing, karate and MMA. Mike had changed many children’s lives by instilling confidence and motivation in them through instruction of martial arts.

Striking coach and former world kickboxing champion has helped him turn raw talents like Jon “Bon” Jones, “Suga” Rashad Evans and Holly Holm into Ultimate Fighting Champions (UFC) Champions. He has helped convince born tough guys to “outthink, out strategize and out work” their opponents. Since 2009, he has done his training with just one eye.

• His early goals were just to fight and prove himself to the world. As time went on, he wanted to win and attain world titles and challenge the legends in the sports. He grew to love it for the challenge and the sport to be world class and coach world champions.
• Mike’s fighting style earned him a reputation of extreme toughness and conditioning that led him to three world titles, including two International Sports Karate Association (ISKA) world titles in 1992 and one Muay Thai world title in 1993.
• Some of his early influences when began fighting were Benny “The Jet” Uriquidez. He admired Benny’s toughness and creativity in fights. At times in his early fights, he wasn’t always creative. This fights he lost were because he didn’t have the tools or the right game plan. Most fighter have the conditioning and power, but it is the creativity and tactical smarts that makes a difference from a good fighter versus a world champion.
• In 17 years, Mike had a 25-7-2 records as a pro kick boxer and 2-0 as a boxer, won two International Sport Karate Association Championships and one Muay Thai world title. He had memorable battles with Marek Piotrowski to a draw in an ISKA world title match and a notable win over legendary Muay Thai World Champion, Coban Lookchaoemaeaithong.
• But he got the coaching bug and began his coaching career while he was still fighting. Mike became a better coach when he retired from kickboxing and focus on coaching. He opened his gym Wink’s Gym in New Mexico in the early 1980’s.
• Mike known as Wink met Greg Jackson through Chris Luttrell, but they became partners until 2007 when they opened their gym Jackson-Winkeljohn Mixed Martial Arts in Albuquerque.
• 2009 Mike became completely blind in his right eye, due to a training accident. Mike was holding a kick pad for a fighter, whose toenail lacerated Mike’s right eye. Four surgeries would follow, but his vision could not be saved. All of this happened in the first year of marriage to his wife, Heather, while she was pregnant with their child. In between surgeries, Mike continued to hold mitts and train his fighters.
• Notable athletes under their tutelage include UFC Light Heavyweight Champion Jon
“Bones” Jones, UFC Light Heavyweight Champion Rashad Evans, UFC
Welterweight Champion George “Rush” St. Pierre, UFC Female Bantamweight
Champion Holly Holm, WEC and Interim UFC Welterweight Champion Carlos Condit,
Invicta FC Champion Michelle Waterson, Frank Mir, Andrei Arlovski, Alistair
Overeem, Gina Carano, Donald “Cowboy” Cerrone, John Dodson, Diego Sanchez,
• and countless other notable names of the sport.
• Mike and Greg have been featured in Sports Illustrated, ESPN, Forbes, and numerous other documentaries, radio shows, television programs, articles and news features.

• Coach Winkeljohn and his wife Heather run a very popular Non-Profit
Organization that works with youth and teens who experience a variety of
environmental, physical and cognitive challenges by empowering and providing
these kids with the skills and benefits of Mixed Martial Arts. Currently they serve
around 40 kids, but the program is growing at the very fast pace.
• Another program Coach Winkeljohn and his wife established over many years is a
Smart Girl Self Defense Program that teaches women and young ladies the self
defense needed to protect themselves, especially in Albuquerque. Classes get
packed with as close as 100 women coming to learn from the best.

Family
• Heather, wife, who holds a bachelor’s degrees in Education and Psychology, previously worked for several years as a Developmental Therapist to infants and children with special needs and is co-owner of the gym.
• Michelle, daughter,
• Autumn, daughter has been participating in grappling tournaments.
• Daughter