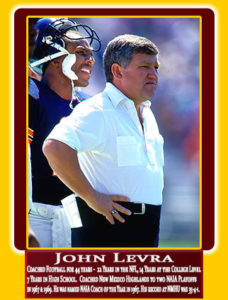 High School:
• Four-year letterman in football and basketball
• 1954 – Team Captain – Led the team to undefeated football season. In fact, from his junior year to the end of his senior season the team won 15 straight games. He was named All-Conference player.
• 1955 Led the basketball to undefeated regular season and lost in the first round of the State Tournament
• Salutatorian of his high school senior class.

College:
• Three-year letterman- Linebacker & offensive guard for the Gorilla football program (1956-58)
• Member of Pittsburg State National NAIA National Championship Football Team Champs in 1957. Under the leadership of Head Coach Carnie Smith, the Gorillas west 11-0 and beat Hillsdale College 27-26.
• Team Captain – Most Valuable Player, “ Mr. Football Award” and the “Richard Stratton Award” for the player who contributed the greatest leadership, academic attainment, habits and attitude on the 1958 team.
• 2nd Team All-Central Collegiate Conference Offensive Guard – 1958
Professionally John was a football coach for 44 years … 23 years in the pros, 14 years in college and 7 years high school …. in the National Football League (NFL) from 1981 until 2002, finishing his career with the Buffalo Bills as their defensive line coach. Over his twenty-two years of NFL coaching his teams compiled a cumulative record of 180-164-0. Few coaches have had the opportunity to coach at every level in their sport, from high school all the way to the highest level of professional sports. Even fewer have the longevity of John from his playing days through his retirement from coaching, Levra’s impact on the game of football spans parts of six decades. In fact, John is the only college coach to have two of his players become Pro Football League Rookie of the year. From little Highlands University, Carl Garrett taking the American Football League award in 1969 and Don Woods winning the National Football League award in 1974.
• High School
o 1959 – 1960 Head Coach – All Sports (football, basketball and track) – McCune High School -McCune, KS
o 1961 Assistant Coach – Washington High School – Kansas City, KS
o 1962 – 1965 Head Coach & Athletic Director – Washington High School – Kansas City, KS
 Won 1st Sunflower League Title in 1964
o College
 New Mexico Highlands University (Las Vegas, New Mexico) 1967 – 1970 Head Coach Record 35-4-1 … only one loss during the regular season. Two of the losses were the NAIA Playoffs in the last minutes of the game. John’s teams were 26-0-1 in the regular season until they lost to preseason #1 ranked Tampa University in the opening season game. In the NAIA national playoffs for four out of five years that he was coaching the Cowboys. The only tie was against the University of Hawaii in 1969. This was unprecedented in NAIA history. The year they didn’t go to the NAIA national playoffs, the Cowboys were undefeated at 9-0 and ranked #1 in the country. The school’s athletic program was put on probation by NAIA weeks before the playoffs because the basketball program didn’t honor contracts to play 4 NAIA teams the previous year.
 .897 winning percentage during his four years as head coach is the best in school history
 1966 Offensive Coordinator for former Pittsburg State teammate, Jack Scofield.
 9-2 Regular Season – Lost in the NAIA national semi-finals to the eventual national champion, Waynesburg 30-27. First time in NAIA playoffs, which were only the top four teams were invited by the NAIA our of 300+ colleges.
 Ranked 5th in NCAA Small College poll and 3rd in the NAIA poll
 1967- Took over as Head Coach after Coach Scofield passed away in January 12, 1967 in a car accident in Texas. John was a passenger in the car.
 His annual salary was $10000 the first year.
 NAIA Coach of the Year
 NAIA Playoffs in 1967 were 9-0, 1st undefeated regular season team in school history going into the NAIA national semi-finals losing to Eastern Washington 28- poll
 1968 The team was undefeated at 9-0 and ranked #1 in NAIA at the regular season. The probation by the NAIA prevented the Cowboys a NAIA Championship .
 The team dominated team during the regular season. The has wins of 85-0, 72-0, 85-14, 62-7 and 70-7. Their closest game was against rival Adam St 28-6.
 Only allowed one team more than 10 points in a game. Colorado School of Mines scored 14 points in an 85-14 score.
 Broke 23 school records
 The offense averaged 331.0 rushing yards, 189 passing yards and 60 points per game. 520 yards total offense and 533 points for the season.
 Defensively, they allowed only 84.7 yards rushing, 107 yards passing and less than 7 points per game
 1969 8-0-1 tie with Hawaii lost to Texas A&I, eventually national champion 28-23 in the last minute of play.
 The Cowboys led by freshman quarterback, Don Woods finished ranked #2. Don would be inducted into the New Mexico Sports Hall of Fame in 1999.
 Conference Coach of the Year
 Finalist for National NAIA Coach of Year
 1970 finished ranked #5. The team went 9-2 for the season. The NAIA change to two divisions. The Cowboys moved up to the top division NAIA Division 1.
 The Cowboys were ranked 14th in total offense and 12th in total defense in NAIA for the entire season.
 Lost 13-12 in the inaugural Boot Hill Bowl in Dodge City, Kansas vs Cameron State College (Ok). The bowl game was sponsored by the NAIA. They dominated statistically the game but a late minute fumble that led to a winning touchdown by Cameron.
 Beat a very good 9-1 Hawaii team in Hawaii

Community Involvement
• Plays a key role in raising scholarship monies for PSU Football
• Active in various PSU Football Letterman’s activities
• Countless hours consulting with high school and college football coaches across the country.
• Conducting an average of three coaching clinics a year across the country including the prestigious Glazer Clinics. Glazer Clinics champion coaches like John for all levels to teach their football clinics.
• Coaching and teaching the defensive line players at the Football University (FBU) football camps