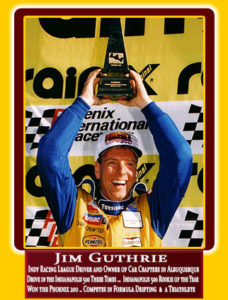 Jim attended the University of New Mexico for three years, expecting to follow his uncle into the dental surgery field. He liked the profession’s “meticulous” nature and working with people, but ultimately found his passion with cars more compelling than teeth. “Here I get to have the same impact, doing meticulous work, but not having to have my hand in someone’s mouth all day,” he says with a laugh.
He was 20 and attending University of New Mexico when his parents – whose garage he had pretty well co-opted for his car projects – told him he needed to either stop with all the car stuff and funnel all his attention into his studies, or move out and open his own shop. “I think they thought that would be tough love and would drive me to quit goofing around in the garage and get serious about school,” he says. “Well, no, I went out and got an apartment, went down the street and got that (first) shop. Jim opened his own body shop in January 1982. He has been the President and CEO from day one. “Here we are almost 38 years later with 200 very loyal employees proudly serving New Mexicans.”
Jim has had racing in his blood since he was born. He has raced on two and four wheels across the state and nation. From bicycles to motorcycles; go-karts to Indy race cars he has had an impact in many facets of racing in New Mexico. His career in racing is underlined by “doing it yourself” attitude in an industry that demands millions and still winning. Without the famous racing car family and NMSHOF inductees, The Unsers – Bobby, Al and Al Jr. – Jim would be biggest name in auto racing from New Mexico.

Professional – Motor Racing
• Motorcycles to Small Formula cars
o 1971- Started his racing career with motocross.
o 1973-1974 Began racing motocross with a Yamaha 80
o 1975 -1980 Competed in Observed trials in the New Mexico Trials Association riding a Montesa Cota 348
o 1981-1982 Road racing a Kawasaki GPZ- 550
o 1983 – Bought and raced a Formula Ford in the Sports Car Club of America (SCCA) Regional Road Racing and the BFG racing series in Colorado.
o 1984 Moved up to the SCCA National Racing in a Swift DB-1 Formula Ford
o 1986 – Moved to the SCCA Pro Racing and competed in his first two Mazda Pro series races.
o 1992-1993 SCCA F-2000 series with a Swift DB-6 earned the track record at Phoenix International Raceway.
o 1994 Ran the Hooters F-2000 Oval Series, finishing third in the point series
o 1995 Ran the Toyota Atlantic Pro Series with a Ralt RT-41, the USAC Oval series driving a Formula Ford 2000 for McGrath Motorsports and ran three Trans-Am races in 1988 Ford Mustang, winning two races.
• Indy Car Racing
o 1996 – Debuted in the Indy Racing League (IRL) when he was hired by Blueprint Racing and then tested to compete in IRL.
o 1997 – When the IRL moved to purpose-built chassis in, Guthrie was forced to take out a second mortgage to purchase a new chassis. With no sponsorship and the prospects of losing his house if his venture was unsuccessful,
 Stunned the car racing world by winning the second race in the new chassis, a Dallara at Phoenix International Raceway in beating legendary racer, Tony Stewart by .854 of second. Jim best previous finish was sixth in Orlando. It was considered one of modern motorsports greatest upsets … sometimes called the Cinderella Man for this huge accomplishment. He earned $175,000 for winning the race.
 1997 qualified outside the second row of the Indianapolis 500
 1997 Indy Racing League Rookie of the Year
 Got sponsorship from Jacuzzi for the Indianapolis 500 and was able to finish the season (placing 12th in season points) and kept his house
 He was in the lead in four of the seven races that he competed
o 1998 – Contested four races in 1998, but then during the Indianapolis 500, he was seriously injured in a multi-car crash, but he returned later in the season for two different teams – ISM to drive a G-Force in the IRL and after a lack of funding, he drove for Riley & Scott at their last race in Las Vegas, Nevada. He has an opportunity to race for Albuquerque’s Galles Racing, but had already made a commitment to ISM.
o 1999 – Attempted the Indianapolis 500 but failed to qualify his Coulson Racing entry.
o 2001 Went back to the Indy 500 and crashed before he qualified for the race.
o Three-time competitor in the Indianapolis 500 … best finish was 12th
• KART Racing
o 1989 -1990 Raced in the International Karting Federation (IKF) Speedway series, winning many races. Kart racing or karting is a variant of motorsport road racing with small, open-wheel, four-wheeled vehicles called karts, go-karts, or gearbox/shifter karts depending on the design. They are usually raced on scaled-down circuits
o 2002 – IKF Kart Racing – won the coveted “Duffy” trophy at IKF Speedway Karting Grand Nationals … The “Duffy” trophy is named after Frank “Duffy” Livingston, who was very active in karting as a driver, mechanic, board member and Past President. It is the most prestigious trophy in kart racing.
o 2003-2004 Ran in SKUSA Shifter kart events in New Mexico
• Indy Lights Racing
o 2007-2009 – Owner of Guthrie Racingin the Firestone Indy Lights Series that fielded a car for his son Sean, who raced in the Star Mazda Series in 2005.
o The team began with 2005 IPS driver Travis Greggat Homestead, and 2005 Star Mazda champion Raphael Matos scoring the team’s first two wins at St. Petersburg (there were two races on that weekend).
o Set a speed record for a standing mile in his class with a Ford GT at 210.7 MPH.
o 2008 – The team had 3 cars with Logan Gomezfilling the second seat and the third was run by Tom Wieringa and Robbie Pecorari. Franck Perera joined the team for the second half of the season and captured a win at Infineon Raceway.
• Drift Racing
o 2011 – Stared competing in Formula Drift with a Chevrolet powered Mazda RX-7 sponsored by Car Crafters.
o 2012 – Competed in Pro-Am Drift events in California, Las Vegas(NV), Phoenix (Az), and Texas.
o Claim to fame might actually be flipping his 2011 Mustang during a Formula Drift/Pro-Am “Drifting competition on September 25, A You Tube video of the accident has more than 177000 views. “I got 16 seconds of fame … I am more known for that crash than any of my other racing according to Jim.
• Other Racing Activities
o 1987-1988 Raced Jet skis and a few boat drag races
o 1991 – Built and raced a Limited Late Model Dirt Car and earned the “Rookie of the Year” award and two wins.
o 2010 – Competed in asphalt modifieds, road racing and instructing at Sandia Speedway
o 2012 Recruited to join Sandia Speedway leadership. Jim assumed control as President of the local speedway racetrack. He was instrumental in getting NAPA to be the Title sponsor for the speedway. He helped build a dirt track and ran the NASCAR K & N Pro Series Race setting a record for attendance at the Speedway.
o 2013 to Present – Member of the USA Cycling Association where he is competing in local bicycle races.
o 2014 to Present – Participated in 12 triathlons over the last three years. Jim is great in biking and running but would struggle in the 1.2 miles swimming part of the triathlon. He has been a master scuba diver, but not a very good swimmer. He hired a swim coach to learn to swim better. In April 2016, he competed his first IRONMAN 70.3 in Monterrey, Mexico.

Professional – Auto Body Shop Business
• June of 1982. Started working out of his parent’s garage while attending UNM. He incorporated opening his first shop, 1800 square feet building with two employees on Trumble Ave. in Albuquerque
• 1985 Moved to shop to a location on Osuna, renting a 4000 square foot shop.
• 1986 Expanded the Osuna location to 12000 square feet and a few more employees
• 1989 Moved to McLeod and San Mateo to 18500 square feet building with 20+ employees
• 2006 Developed Automotive Management Software called CIMS. It was sold to Mitchell International in late 2006
• 2007 Moved his body shop to Montano Blvd just west of I-25 to 50,000 square feet building
• 2012 Expanding the building to 70,000 square feet and 60+ employees
• In the last five years, Car Crafters has doubled the business and its employees to better serve the repair needs of our community.
• 2019, there are four Collision repair locations in Albuquerque and two in Rio Rancho

Community Involvement – Guthrie is actively involved in the local community in Albuquerque especially financially supporting youth activities of all kinds.
• Albuquerque Christian School
o Board Member from 1990 – 2004 and again 2017 to Present
o Treasurer of the Board for 14 years
o In January 2019, the school moved into one Jim’s original body shops on McLeod and San Mateo Blvd. The school was forced to move before the end of the school year. They completely remodeled the old body shop over the previous seven months into fourteen classrooms, a gym, a kitchen, teacher lounge and administrative offices. The school has pre-school to 8th grade educational programs. In 2019, there were 135 students. The school can grow to 350 students.
o Jim is the biggest fundraiser of school.
• 2011 Major sponsor of the Business Symposium in conducted by the Marty Saiz’s State Farm Agency and Albuquerque Hispano Chamber of Commerce
• 2012-2018 – New Mexico Motor Speedway Board Member
• 2013 to Present – Major Sponsor the New Mexico Games
• 2013 to Present – Major sponsor of the ESPN 101.7 THE TEAM’s sports shows and broadcasts of high school games.
• 2014 to Present – Major Partner Company of the New Mexico Sports Hall of Fame
• 2014 to Present -CAR International Board Member and serves on Governance, Executive and Strategic committees.
• Universityof New Mexico’s Formula Society of Automotive Engineers (FSAE)
o Since 1996 started providing financial support, painting the cars. 1996 painting the cars , providing car parts to fundraising
o 2017 to Present – Executive Director
• 2015 to Present – Major Sponsor of Proview Networks’ high school and youth games over the internet and on Comcast Channel 26.
• 2017 – present – True North Financial Ministries- DBA Koach Board Member

Family
• Wife, Missy … teenage sweethearts, who met at church camp, and married in 1982, when he was 21 and she was 18
• One son, Sean
• One daughter, Kayla
• Three Grandchildren, Connor, Andylev and Ryan