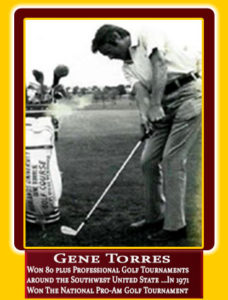 High School:
• 1951 Worked the winter at the local Trinidad Municipal Golf Course shoveling coal into furnaces to earn spending money. This led him into caddying during the summer and got him inspired to start playing golf. Some of the local golfers eventually gave him a few clubs to practice with and the rest is history. He fell in love with the game and would spend hours and hours trying to figure how to hit certain golf shots. This is what made him one of the best of using his imagination on recovery shots. o He was self-taught and never had a golf lesson from a PGA Professional.
• 1952 Started caddying at golf tournament in Trinidad, Colorado.
• 1952 Finished 36th out of 291 golfers at the National Jaycee Youth Tournament in Ann Arbor Michigan
• 1953 Won the Colorado Jaycee Youth Tournament in Denver, Colorado.
• 1954 Finished 7th in Colorado State High School Individual Golf Tournament
• 1953 Finished 66th at the National Jaycee Youth Tournament
• 1955 Won the Colorado Jaycee Golf Tournament.
• 1955 Finished 60th at the National Jaycee Youth Tournament, which was held at the University of New Mexico North Golf Course in Albuquerque, New Mexico.
• 1955 Set the new golf record, shooting 16 under par for 52 holes at the Trinidad Invitational Golf Tournament.
• 1955 Finished 10th National Jaycee Youth Tournament tied with Jack Nicholas, who would become a legend in golf.
• 1956 Won the Trinidad Invitational
• 1956 Colorado State High School Individual Golf Champion – There was only one classification for the state in Golf, meaning that he was officially the top high school golfer in the state.
• 1956 Club Champion at the Trinidad and Alamosa Golf Course tournaments.

Honors:
• 2004 Inducted to the New Mexico Highlands University Hall of Honor
• 2004 December Achieved the highest honor you can receive from the Professional Golfers Association of America, The Lifetime Achievement Award.
• Honored by the Las Vegas _ San Miguel Chamber of Commerce for his outstanding contribution to the Las Vegas area.