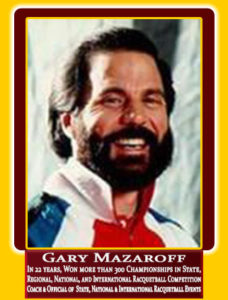 Professional:
Gary won over 400 racquetball championships—State, Regional, National, International. He has traveled to over 30 countries as a player, coach, instructor, promoter. Organized and operated over 600 court sport events since 1973. He began an un-interrupted presidential term with the New Mexico Racquetball Association in 1974, bringing that organization to the forefront of the AARA’s state affiliate structure. Through AmPro and AmPro instructional programs, Gary has certified hundreds of players and instructors, while himself serving as a teaching pro and instructor since the late 70s. Gary also served as an assistant coach for two world championship U.S. national teams, then took that expertise “on the road” by coaching national teams from other countries