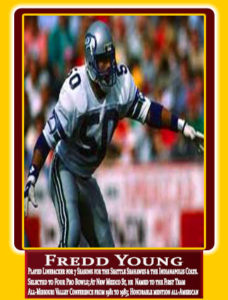 High School
• 2-year letterman in basketball and football.
• During a typical Friday night at Wilson High, several college recruiters were on hand to watch a teammate named Aaron Bolton, a 6-foot-6 lineman. By the end of the evening, several of them were talking about the undersized linebacker who was in on just about every play. “I had the game of my life,” Young recalled. “I had a couple of interceptions and about 20 tackles.”
• New Mexico State and North Texas in nearby Denton were the only schools to offer full rides.

Professional
Britt Mayberry made the name for him. Mayberry, a little-known backup linebacker on the New Mexico State football team, was the person who suggested that Frederick Kimball Young change the spelling of his shortened first name. Mayberry told his
teammate, Fred Young, that he should add a second ‘D’ to his name because he hit so hard it made opposing players stutter. Thus, Fred Young became Fredd Young.
Fredd emerged as one of the hardest hitting tacklers even before he broke the starting lineup late in his rookie year. Just like he did to opposing players, Young made quite an impact during his time in Seattle. Young’s jersey number for the Seahawks was 50
• Drafted in the 3rd round of 1984 NFL Draft, the 76th overall pick.
• 1984 September 3rd Made such an impact in his first official NFL game against the Cleveland Browns that the Seahawks eventually had to make room for him with the starting defense. It was a game that set the tone for his NFL career.
• 1984-1985 Most famous for being the Seattle Seahawks special team’s player of the year
• 1985 – 1987 Stalwart Linebacker in the middle of the Seahawks defense
• 1988 May, after, he was traded to Indianapolis for the Colts’ 1st round draft picks in 1989 and 1990.
• He retired after three years in Indianapolis due to injuries.
• In his career, he had 601 tackles, 21 quarterback sacks and 3 interceptions

Honors
• Four consecutive Pro Bowls … Earning a spot in the Pro Bowl as a rookie. Young was a full-time starter the following year yet made the Pro Bowl as a special teamer again. In 1986 and ’87, he went to the Pro Bowl as a linebacker.
• Two All-Pro selections (for special teams and strong inside linebacker)
• 1991 Inducted into the NMSU Hall of Fame and Aggie Legend,
• 2010 Named to the Seattle Seahawks 35th Anniversary Team
• 2015 Top 40 Greatest players in the Seattle Seahawks history – No. 35 by the Seattle Times
• 2016 To honor the team’s 40th season, the Seahawks asked fans to vote for the Top 40 players of all time – Fredd was ranked #27 of all time.