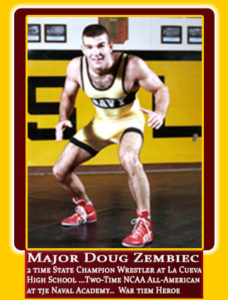 College Accomplishments
• As a collegiate wrestler compiling a 95–21–1 record
• Two-time NCAA All-American.
• His fellow wrestlers sometimes referred to him as “The Snake” for his anaconda-like grip.
• Well known amongst his contemporaries throughout his athletic and professional life for his exceptional physical fitness. His coach, Reginald Wicks, referred to him as “the best-conditioned athlete I’ve ever been around.”

Military Service
He served in the United States Marine Corps from 1997 until killed in action in 2007. He served combat tours in Kosovo, Afghanistan and Iraq, Doug is known as the “Lion of Fallujah” and also referred to as the “Unapologetic Warrior” was an officer in the United States Marine Corps and a member of the CIA’s Special Activities Division’s Ground Branch. Doug was killed in action while serving in Operation Iraqi Freedom. He is best known for his actions during Operation Vigilant Resolve. This Operation were detailed in the book No True Glory: A Front-line Account of the Battle of Fallujah by Bing West and for an article that ran in the Wall Street Journal following his death.

Upon graduation from the Naval Academy, Zembiec was commissioned as a second lieutenant in the United States Marine Corps. After finishing The Basic School, and the Infantry Officer’s Course, he was assigned to First Battalion, Sixth Marine Regiment as a rifle platoon commander in Bravo Company, starting April 1996. After successfully passing the Force Reconnaissance indoctrination in June 1997, he was transferred to 2nd Force Reconnaissance Company, at Camp Lejeune, North Carolina. As part of his training for Force Reconnaissance, he completed Army Airborne School as well as the Marine Combatant Diver Course. He served for two and a half years as a platoon commander, eight months as an interim company commander, and one month as an operations officer.
Zembiec’s Force Reconnaissance platoon was among the first special operations forces to enter Kosovo during Operation Joint Guardian in June 1999.

In September 2000, he was transferred to the Amphibious Reconnaissance School (ARS) located in Ft. Story, Virginia and served as the Assistant Officer-In-Charge (AOIC) for two years.
In 2001, Zembiec competed in the Armed Forces Eco-Challenge as team captain of Team Force Recon Rolls Royce.

From ARS, Zembiec was selected to attend the Marine Corps’ Expeditionary Warfare School in Quantico, Virginia graduating in May 2003. Following the Expeditionary Warfare School he took command of Company E, 2nd Battalion, 1st Marine Regiment, 1st Marine Division in July 2003.
He was nicknamed the “Lion of Fallujah” as a result of his heroic actions leading Echo Company 2/1 during Operation Vigilant Resolve in 2004. As a rifle company commander, he led 168 Marines and Navy Corpsmen in the first conventional ground assault into Fallujah, Iraq. He earned the Silver Star and the Bronze Star with Combat Distinguishing Device. He also received two Purple Hearts due to wounds incurred in action.
He turned over command of Echo Company in November 2004 and served as an assistant operations officer at the Marine Corps’ First Special Operations Training Group (1st SOTG) where he ran the urban patrolling / Military Operations in Urban Terrain (MOUT) and tank-infantry training packages for the 13th Marine Expeditionary Unit in preparation for an upcoming deployment to Iraq. Zembiec transferred from 1st SOTG to the Regional Support Element, Headquarters, Marine Corps on June 10, 2005. His promotion to Major was effective on July 1, 2005.

Zembiec was serving in the CIA’s Special Activities Division (renamed Special Activities Center in 2016 Ground Branch in Iraq when he was killed by small arms fire while leading a raid in Baghdad on May 11, 2007. Zembiec was leading a unit of Iraqi forces he had helped train. Reports from fellow servicemen that were present when he was killed indicate that he had warned his troops to get down before doing so himself and was hit by enemy fire. The initial radio report indicated “five wounded and one martyred” with Major Zembiec having been killed and his men saved by his warning. On May 16, 2007, a funeral mass was held at the Naval Academy Chapel and later that day he was interred at Arlington National Cemetery, Grave Number 8621, Section Number 60. Zembiec is buried only a few yards away from his Naval Academy classmate, Major Megan McClung. McClung was the first female Marine Corps officer killed in combat during the Iraq War, and first female graduate in the history of the Naval Academy to be killed in action. Shortly after his death, he was honored with a star on the CIA Memorial Wall, which remembers CIA employees who died while in service. Although Zembiec’s star officially remains anonymous as of July 2014, his CIA employment was confirmed in interviews with his widow and former U.S. intelligence officials.

In July 2007, Secretary of Defense Robert Gates publicly lost his composure while discussing Major Zembiec during a speech. Major Zembiec was also prominently featured in a high-profile Wall Street Journal column in September 2007.

In November 2007, Zembiec’s high school Alma Mater, La Cueva High School, inducted him as the charter member of their Hall of Fame and named the wrestling room in his honor.

The NCAA announced that Zembiec would be awarded the 2008 NCAA Award of Valor. In January 2008, General David Petraeus, Commanding General Multi-National Force – Iraq (MNF-I) dedicated the Helipad at Camp Victory located at Baghdad International Airport in Zembiec’s name. He referred to Zembiec as “a true charter member of the brotherhood of the close fight.”

On May 11, 2009, a petition was presented to the Secretary of the Navy to have the next Arleigh Burke class destroyer to be commissioned named after Zembiec.

Major Zembiec left many volumes of personal writings behind, some of which were shared at his funeral. The final words of the eulogy, delivered by his friend Eric L. Kapitulik, have evolved into a new credo for many members of the USMC and USMIL communities at large, amounting to what Kapitulik said was a summary of Zembiec himself.

Be a man of principle. Fight for what you believe in. Keep your word. Live with integrity. Be brave. Believe in something bigger than yourself. Serve your country. Teach. Mentor. Give something back to society. Lead from the front. Conquer your fears. Be a good friend. Be humble and be self-confident. Appreciate your friends and family. Be a leader and not a follower. Be valorous on the field of battle. And take responsibility for your actions. Never forget those that were killed. And never let rest those that killed them.

Kapitulik said the creed came from the man who knew Zembiec the longest, as indicated by the Major’s written description: “Principles my father taught me.”