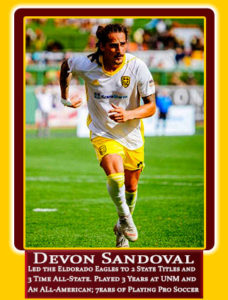 High School
• Devon Sandoval, as a freshman, made the varsity soccer squad at Eldorado High
School in 2005. That year, the Eagles won the state championship. Sandoval and
Company did the same thing in 2006.
• Three-time All-State selection
• Three-time District Player of the Year.
• Male Athlete of the Year in 2008 and 2009
• Eldorado Eagles soccer, with Devon Sandoval in the lineup, won two state titles and three district titles.
• Devon was also a three–year starter for Classic FC Redstar of the New Mexico Olympic Development Program (ODP) from 2006-08 and a two-year starter for his regional ODP in 2007 and 2008. He played club soccer for, who were five-time State Champs, two-time President’s Day Champs, and Region IV ODP representatives.
• ESPNRise.com National Player of the Week (Sept. 10, 2008)

Community Involvement
• Since returning to New Mexico, Sandoval has been heavily involved in the team’s youth initiatives – both camps and the high-performance program. He has also made multiple appearances at metro area schools and community events.
• Most recently founded Albuquerque Futbol Academy (along with Chris Wehan) to train and give back to the youth community.