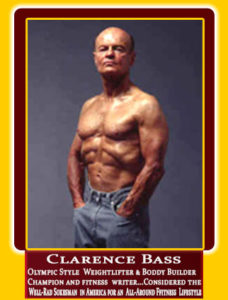 Honors:
• Among 100 UNM graduates chosen by the Alumni Association to represent the “Best Efforts” of the university on the occasion of its 100th anniversary
• 2003, The Association of Oldetime Barbell & Strongmen honored him with its highest award, the Vic Boff Award for lifetime achievement.
• Photos of Bass from ages 15 to 70 are on display in the Lutcher Stark Center for Physical Culture and Sportsat the University of Texas at Austin.
• 2013, experts in exercise physiology gathered at the Stark Center to celebrate Bass’ lifetime achievements and discuss his book Take Charge.

Family:
• His parents were both in the health field, one a doctor and the other a nurse.
• Wife, Carol