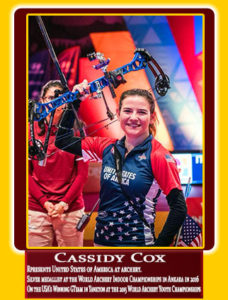 She attended Immanuel Lutheran School from pre-school through 8th grade where she played volleyball, basketball and ran track for the school. Extracurricular sports included softball for Mile High Little League and archery for the local Junior Olympic Archery Development club, The Chile Peppers.

High School:
• While at Manzano High School, Cassidy, with the support of her teachers and the administration, continued to compete at a very high level in archery.
• Involved in activities such as student senate and was the baseball manager
• Maintained a cumulative GPA of 3.8.
• 2015-2016 Member of the National Honor Society
College
• Currently maintaining a 3.8 GPA all while leading a full schedule of archery competitions.
• She has obtained her Associates degree in psychology through CNM. She is currently working towards her bachelor’s degree in psychology by taking online classes through Capella University. After her bachelor’s degree is complete, Cassidy plans to get her Master’s degree in Sports Psychology.
Archery Career
• She attended Immanuel Lutheran School from pre-school through 8th grade where she played volleyball, basketball and ran track for the school. Extracurricular sports included softball for Mile High Little League and archery for the local Junior Olympic Archery Development (JOAD) club, The Chile Peppers. During Cassidy’s early years in the JOAD club, she only attended local competitions, including the US National Indoor Championships, as one of the tournament locations was held in Rio Rancho for many years.
• 2012 – Attended High School her freshman year at Sandia High School where she played for the Junior Varsity softball team. It was around the middle of her high school softball season in 2013 when Bob Romero, a high-level archery coach approached and talked to her pursuing higher-level opportunities in archery. Cassidy had been competing in archery at the local and national level in indoor archery since she was about 8 years old and her scores were at a level where Bob felt she could compete with the best girls in the country at her age. While she had competed at the local, national and even at the famous “Vegas Shoot” in indoor archery, Cassidy had never competed in outdoor target archery. With Bob’s guidance and much practice, she worked to ready herself for her first outdoor target event in Chula Vista, CA. This event, the SoCal Showdown, is one of five national qualifying events for the United States Archery Team (USAT) held every year.
• 2013- the SoCal showdown was also the trials event for the Youth World Archery Championships. Her first outdoor event was a team trial. Trials are some of the most intense and stressful tournaments there are in archery. She finished in the middle of the pack and did not make the team for the Youth Worlds nor did she finish high in the SoCal showdown, but she learned a lot about herself and the sport of archery and made a decision right then; she had already transferred high schools to Manzano HS, originally to play softball with many of her childhood friends and teammates, but decided to leave other sports and focus on the sport of archery to see where it would take her. Cassidy was familiar with and performed very well at indoor archery, so later in 2013 we traveled to Florida so she could shoot in the trials for the World Indoor Championships. She had to shoot up in age as there was not a division available in her age class. She competed against 18 – 20-year-old archers as a 15-year-old. She performed very well and opened many eyes. She did not make the team of three but was named the alternate as the 4th place finisher in the trial.
• 2014 – her first full year shooting USAT qualifying events. At the end of the season, Cassidy had taken the first-place spot in the Cadet Female Compound Division – she had made the US Archery Team. Also, that year Cassidy was named to the first ever Compound Junior Dream Team through USA Archery.
• She continued as a member of the Compound Junior Dream Team for two years, which gave her opportunities to compete in Italy and Canada. Since 2014, Cassidy has made every US Archery team and qualified for every World Archery Championship as a member of the United States Team in indoor target, outdoor target and field archery in youth and adult divisions. She has competed for the United States in many World Cup archery tournaments as an adult, medaling in several.
• 2017 – Represented the United States at the World Games, a prestigious multi-sport event which is held every four years.
• Because of her success, archery has taken Cassidy from competing locally to nationally to internationally. Her archery schedule is a very full one. She competes year-round in many disciplines and travels across the US and the world. She has many worldwide friends and has seen over 15 different countries and every
continent except Antarctica. She represents New Mexico and the United States well.
• Cassidy’s archery and school schedule doesn’t give much time for a job. When in town, she works assisting in the office at New Mexico Rural Water Association, gives private archery lessons, and conducts 3-4 days archery camps.

Community Involvement:
• Hold archery camps for children all over New Mexico
• Active member of Immanuel Lutheran Church and was very involved in her youth group traveling to National Youth Gatherings in 2014 and 2017. She has with her youth group and on her own assisted at The Storehouse homeless kitchen, The Rock homeless assistance, and Joy Junction homeless shelter.
• Involved in student senate and National Honors Society when she was at Manzano High School. These involvements included many volunteering hours at various places and events like nursing homes, elementary schools, and sporting events.