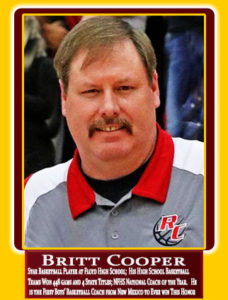 College
• 1983-85 Two-year letterman
• 1984 Played basketball at Sul Ross State University and was the TIAA’s Conference Freshman Player of the Year.

Family
• Anjv, wife of 27 years, who Britt is very grateful for her support only a coach’s wife would understand. Anjy is a real estate agent.
• Two children, Desiree and Sterling. Desiree is a Roswell High School and ENMU graduate and is the New Media Coordinator for ENMU. Sterling is also a Roswell High School graduate and is currently attending New Mexico State University He was a member of the 2014 State Championship team.