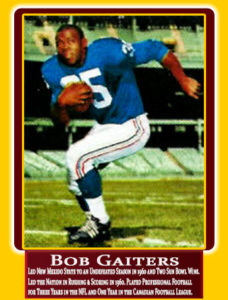 High School
• 3-year letterman in football and 2-year letterman in basketball
• Played sophomore and junior years as an offensive lineman
• Moved to fullback his senior year and rushed for nearly 1,000 yards and 11 touchdowns
• Led the team to an 8-1 record and a Central Ohio League championship

Professional
He was drafted by the Denver Broncos in the 1961 American Football League Draft and by the New York Giants in the 1961 NFL Draft. He played 31 game in the NFL and rushed for 848 yards with 8 touchdowns.
• 1961-1962 Played for the New York Giants
• 1962 San Francisco 49ers.
• 1963 Spent the season with the Broncos of the AFL.
• 1964 Played for the Hamilton Tiger-Cats of the Canadian Football League
• Finished his career in the Continental Football League, where he played of the Newark Bears in 1965, the Hartford Charter Oaks in 1966 and the Orange County Ramblers in 1967.
• After retiring in 1969, he became acquainted with Bill Medley of the Righteous Brothers, who helped Bob start a career in the record production business, starting out at MGM Records.