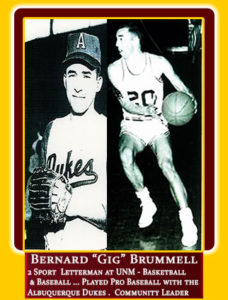 On Gig’s mother’s side our grandparents were first generation Italians who settled in Santa Fe. Vincente di Lorenzo, my grandfather, was a mason and painter and assisted in the reconstruction of the Cathedral in Santa Fe along with other Italian artisans in the late 1800’s. The Cathedral has a plaque in the vestibule of the Church honoring the Italians who helped with the construction –his name and others are displayed prominently. Carmela Campanole, our grandmother moved to Santa Fe from Italy where she and Vincente were married. Vincente and Carmela had 7 children, all natives of New Mexico and permanent residents.
My grandfather’s family was originally from the Midwest but moved to New Mexico working for the Santa Fe Railroad in a variety of positions. They retired back in Boonville, Missouri for family reasons. After my mother passed away my father moved to Missouri. At the age of five, Gig and his brothers moved to Boonville, Missouri as a result of their mother passing away. Gig and his three older brothers lived with grandparents until our father was able to rejoin us in Missouri. Gig attended a small Catholic school in Boonville with approximately 150 students enrolled. Every summer he would return to Santa Fe living with cousins and then return to Missouri for the school year. My work experience began at the age of 14 as an intern in a pharmacy and soda fountain business. My family returned to Albuquerque in 1956. During high school, Gig was recruited by several Division 1 schools and honored to accept a basketball scholarship from the University of New Mexico. Gig was an outstanding athlete with years of active support for the University of New Mexico, the UNM Athletic Department and the Albuquerque community.

Family:
• Wife – Jeanne McGillan, a resident of New Mexico for 72 years and I have been married since 1963. Jeanne is a former educator, employee of the PNM Human Resources Department, and a Career Guidance Counselor at UNM. She has been an avid tournament tennis player, and is now an experienced fly fisher woman, and golfer.
• Daughter – Linley Daly, her husband, Mike Daly, and their three children, Lauren, a graduate from Marquette competed in crew, Ryan, a graduate of Bosque School competed in basketball and soccer and is now at UNM, Maya, a freshman in high school is an outstanding student and multi-talented.. All live in Albuquerque except for Lauren who lives and works in NYC. Son-in-law, Mike is a graduate from U. of Connecticut where he played varsity baseball. Mike also has graduate work in finance from the University of Arizona and is a First Vice President with Morgan Stanley in Albuquerque. Linley was an outstanding athlete, all-state basketball and track record holder at St. Pius and is a graduate of the University of Arizona where she competed as a member of the University of Arizona Pac-12 basketball program and received several academic recognitions.
Son – Craig and spouse, Marta, are both graduates of Notre Dame and have four children–Ellie, a freshman at St. Louis University, Madrid, Ben, Senior at Culver Academy, was part of the four-man crew team from Culver recently winning a National Championship. Leo is a freshman at Culver Academy and is competing at a very high level in soccer and basketball. Moira is an eighth grader and enjoys and excels in dance and gymnastics. Craig was an outstanding athlete at St. Pius competing in basketball as a member of the Sartans undefeated state champion team in 1985. He also excelled in soccer and as All-State baseball player. Craig and Marta and family live in Denver, recently moved there from South Bend, Indiana. Craig is a business consultant and Marta competed in soccer for the Notre Dame Irish soccer team, earned a master’s degree from the University of Michigan and now has a professional private practice in life and career counseling.