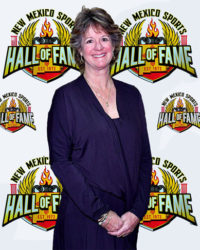 A former four-sport standout at Albuquerque’s Sandia High (class of 1978) and community and business leader, Paula is in her first year with the committee. She brings a wealth of knowledge about New Mexico prep sports. The 1983 University of Arizona graduate (BS in education) has shared her love for sports as a coach in softball, basketball and tennis. She lettered at Sandia in volleyball, field hockey, basketball and softball.
In 1978, Paula was shortstop and co-captain for the Matadors’ state championship softball team. “Winning state is something I will always remember,” she said. and I would love for Sandia to win another one. It’s the only State Championship Sandia has ever won in softball.”
At the U of A, she was very active in intramural sports.
“And I’m still a big fan of U of A sports,” she said, noting that if the Wildcats play in Albuquerque, “I’ll be there.”
Paula has stayed extremely active in sports, and her passions include golf, cycling and tennis.
She has climbed Mt. Kilimanjaro and biked across Iowa. In tennis, she qualified for nationals in 2009 and 2017 at the 4.0 level.
Outside of sports, Paula started PS Ink Screen Printing & Embroidery in 1996, which is still very successful in Albuquerque. She was also a member of the Leadership Albuquerque Class of 2003 and served on the curriculum committee for two years.
Paula’s hobbies include traveling, food and reading